Mr. Moin M. Fudda, Independent Director and Chairman of the Board of Directors, has over 45 years of professional experience, which encompasses working for the corporate sector and performing diplomatic duties. He holds B.S. in Insurance & Economics from the RCD International School of Insurance, Tehran and MBA in Insurance & Risk Management from St. Jones University, New York where after post-graduation he joined the faculty as an Adjunct Assistant Professor and also worked for the American International Group (AIG) in New York as a Controller – Reinsurance.

He is the Honorary Consul General of New Zealand for Pakistan and being its sole representative, his responsibilities include, bilateral relations, consular affairs, trade, education & support to Immigration NZ. He is also Country Representative of SCOR tier 1 Global Reinsurer. His current positions include:

Prior to joining KSE, he was Country Chief of New Zealand Insurance and Commercial Union (CU now AVIVA) and Founder MD of CU Life (now Jubilee Life). He was one of the two members actively involved in drafting the Pakistan Insurance Ordinance 2000 which replaced the 1939 Insurance Act. He has also held positions such as Country Director, Center for International Private Enterprise, an affiliate of US Chamber of Commerce, Executive Director Pakistan Reinsurance Company and Manager, Stewart Wrightson, Lloyds Insurance Brokers.

His other professional affiliations were:

In 1989, he was presented with the Best Managers Award by Institute of Business Administration (IBA). In 1990, NZ Commemoration Medal was conferred on him by the Queen of New Zealand and in 2002, he was recognized as the Honorary Officer of the New Zealand Order of Merit (ONZM). In 2006, he was conferred the coveted Sitara-e-Imtiaz (S.I.) by the President of Pakistan. He and his wife have traveled to 130 countries in seven continents. 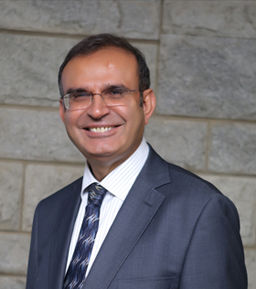