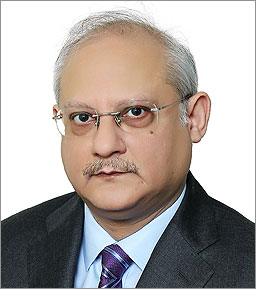 Mr. Naqvi holds the degrees of MBA in Finance and B.Sc. with Honors in Banking and International Finance from The City University, CASS Business School in London, United Kingdom and completed his High School (GCE A-Levels) from Dover College, Dover, England. He has successfully completed the CFA Level II Exams. He brings with him 40 years of work experience in global financial services, operating in diverse environments of the North America, Europe and Middle East, besides that of Pakistan.

Mr. Naqvi was Managing Director of Pakistan Stock Exchange (PSX) from 2011 to 2017, when he took early retirement and resettled in Toronto, Canada. During his tenure at PSX, he oversaw and guided a massive transformation of the stock exchange and Pakistan’s Capital Market. Some of his key accomplishments included: implementation of the demutualization of the stock exchange; integration of three stock exchanges of Karachi, Lahore and Islamabad and emergence of the Pakistan Stock Exchange as the single capital market in the country; launch of the internet/wireless trading platform; advocating with MSCI and international portfolio investors for Pakistan’s inclusion into MSCI Emerging Market Index and successfully managing the process; playing a key role in divestment of 40% equity stake of PSX to institutional foreign investors. Under his tenure, the revenue and profits of the Exchange grew from Rs.692 million and Rs.50 million, respectively in 2011, to Rs.1,477 million and Rs.277 million in 2017.

During this period, he was also the Chairman of the National Clearing Company of Pakistan (NCCPL) and guided the transformation of NCCPL into a full Central Counter Party (CPP) with its own risk management capability as well as the introduction of electronic capital gains tax calculation and recovery for the Federal Board of Revenue of the Government.

Prior to joining PSX, Mr. Naqvi was the Chief Executive Officer of a leading asset management company. Earlier, he served as CEO of AKD Securities Ltd., a leading corporate stock brokerage firm in Pakistan which he helped transform from a proprietary business into a full-scale investment banking and brokerage firm. The Company was recognized by the CFA Association of Pakistan as the best domestic brokerage firm for two consecutive years in 2006 and 2007. Mr. Naqvi also served as Chairman of the first technology venture capital fund of Pakistan (TMT Ventures) and oversaw the completion of several ventures through successful exits at I.R.R. ranging from 35-40%.

Economic & market analysis and research have been the hallmark of Mr. Naqvi’s career. He led an independent investment research firm in the USA/Canada, Investology Inc., which was ranked by ‘Business Week’ in 2004 as the third best out of 300 independent research firms in North America. Prior to this, he headed the research team at Merrill Lynch Pakistan. He was also the Head of Research at the investment advisory company of Morgan Stanley Asset Management’s Pakistan Investment Fund for four years from 1996 to 2000.

Mr. Naqvi has been involved in landmark investment banking transactions in Pakistan, including the privatizations of Kot Addu Power Plant, National Refinery and United Bank Limited. He was a member of the Capital Markets Committee, Economic Advisory Council of the President of Pakistan in the late 1990’s and has served as Vice-Chairman, South Asian Federation of Exchanges (SAFE); Director, Institute of Financial Markets; and Director, JCR-VIS Credit Rating Agency, besides NCCPL and CDC.