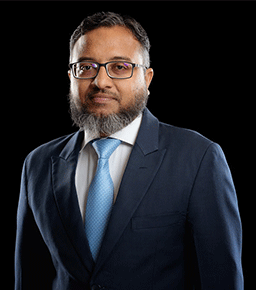 Mr. Hammad Ali Faisal is fellow member of the Institute of Chartered Accountants of Pakistan and carries a post qualification experience of more than thirteen (13) years. He also holds Bachelor’s Degree in Commerce from University of Karachi. Mr. Faisal began his career as a trainee with A. F. Ferguson & Co. Chartered Accountants (a member firm of PwC network) where he completed his mandatory training period and later worked as Manager Taxation. During his stay with A. F. Ferguson, he was also deputed to different locations of PwC including Kuala Lumpur, Malaysia office.

Mr. Faisal joined Central Depository Company of Pakistan Limited (CDC) in the year 2008 as Manager Internal Audit and after serving for three (3) years he was elevated to the position of Head of Operations & Customer Support Services. Later, in 2015, Mr. Faisal was entrusted with the responsibilities of Chief Internal Auditor (CIA) wherein, he served for four years. Prior to joining CDC Mr. Faisal also served as Manager Accounts in Pakistan Cables Limited.

Throughout his association with CDC, he has worked on various significant assignments and played a pivotal role in developing system as well as operational controls over Free Delivery reason codes Mechanism, Capital Gain Tax Reforms and exchange of CGT related information with the Clearing Company. His major achievements include implementation of readiness, and certification under International Standard on Assurance Engagement-3402 across the Company.

Mr. Faisal is also serving as Member of the Oversight Committee formed by the Securities and Commission of Pakistan under Joint Inspection Regulations, 2015.

Over the years, he has represented CDC on various local and international forums including the U.S. Securities & Exchange Commission in Washington DC and Asia-Pacific Central Securities Depositories Group (ACG).